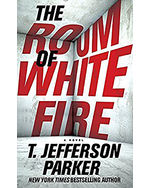 The Room of White Fire

Roland Ford—once a cop, then a marine, now a private investigator—is good at finding people. But when he’s asked to locate an Air Force veteran who’s escaped from a mental institution, he realizes he’s been drawn into something deep and dark. What he doesn’t know is why a shroud of secrecy hangs over the disappearance of Clay Hickman—and why he’s getting a different story from everyone involved. In a flash, what began as just a job becomes a life-or-death obsession for Ford, pitting him against immensely powerful and treacherous people and forcing him to contend with chilling questions about truth, justice, and the American way.