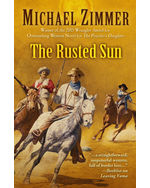 Half-frozen and nearly dead, Gil Ryan rode into the little mountain town of Larkspur just ahead of a raging late-winter blizzard. He had no way of knowing the surrounding Ensillado Basin was about to be plunged into a range war, or that the man who murdered his brother was there. Forced into a war he doesn’t want, Gil assembles a ragtag army.