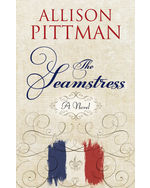 France, 1788: It is the best of times . . . On a tranquil farm in the French countryside, orphaned cousins Renée and Laurette have been raised under the caring guardianship of Émile Gagnon. By day they tend his sheep; by night they whisper secrets and dreams in their cozy loft. It is the worst of times . . . Paris groans with a restlessness that can no longer be contained, fueled by hunger and hatred. Even Gagnon’s table in his quiet village bears witness to the rumbles of rebellion. It is the story that has never been told . . . In one night, the best and worst of fate collide. And Gagnon can only watch as those he loves march straight into the heart of the revolution.