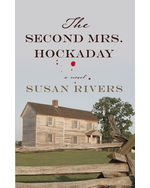 When Major Gryffth Hockaday is called to the front lines of the Civil War, his new bride is left to care for her husband’s three-hundred-acre farm and infant son. Placidia, a mere teenager herself living far from her family and completely unprepared to run a farm or raise a child, must endure the darkest days of the war on her own. By the time Major Hockaday returns two years later, Placidia is bound for jail, accused of having borne a child in his absence and murdering it. What really transpired in the two years he was away?

Inspired by a true incident, this saga conjures the era with uncanny immediacy. Amid the desperation of wartime, Placidia sees the social order of her Southern homeland unravel as her views on race and family are transformed. A love story, a story of racial divide, and a story of the South as it fell in the war, The Second Mrs. Hockaday reveals how that generation — and the next — began to see their world anew.

“A stirring Civil War–era version of The Scarlet Letter. Told through gripping, suspenseful letters, court documents, and diary entries, Rivers’s story spans three decades to show the rippling effects of buried secrets, when the Hockadays and future generations must learn to overcome the damage this secret and the war have done to all the families involved.”

“Fans of Geraldine Brooks’s Year of Wonders and Sarah Blake’s The Postmistress will enjoy this solid historical novel, which is also a good choice for book clubs, as Dia’s motivations for her actions will yield great discussions.”