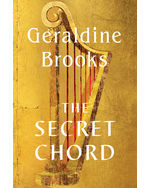 The story of King David shimmers between history and legend. Now Pulitzer Prize–winning author Geraldine Brooks peels away the myth to bring David to life in Second Iron Age Israel. The Secret Chord traces the arc of his journey from shepherd to beloved king to murderous despot and into his dotage, providing new context for some of the best-known episodes of David’s life while illuminating others that have been neglected.

“With the verve of an adroit storyteller . . . Brooks evokes times and place with keenly drawn detail . . . Ambitious and psychologically astute.”

“In her gorgeously written novel of ambition, courage, retribution, and triumph, Brooks imagines the life and character of King David in all his complexity . . . The language, clear and precise throughout, turns soaringly poetic when describing music or the glory of David's city . . . taken as a whole, the novel feels simultaneously ancient, accessible, and timeless.”