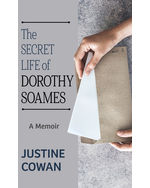 
The Secret Life of Dorothy Soames: A Memoir

A woman discovers the shocking secret at the center of her mother’s life.
Justine had always been told that her mother came from royal blood. But beneath the polished veneer lay a fearsome temper that drove Justine from home the moment she was old enough to escape. Years later, when her mother sent her an envelope filled with secrets from the past, Justine buried it in the back of an old filing cabinet. Overcome with grief after her mother’s death, Justine found herself drawn back to that envelope. Its contents revealed a mystery that stretched back to World War II and a resilient child who dreamed of escape as German bombers rained death from the skies.

“Well-researched and highly personal, the book presents a fascinating narrative tapestry that both informs and moves. A candidly illuminating debut memoir.”

“This frank account of a real-life Dickensian dystopia captivates at every turn.”

“Cowan debuts with an impressive memoir about the unearthing of her deceased mother’s secret past and a generations-long cycle of family trauma. This frank account of a real-life Dickensian dystopia captivates at every turn.”