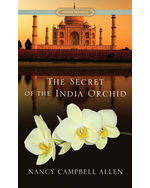 The Secret of the India Orchid

Anthony Blake is in love with Sophia Elliot. But his plans to court her are put on hold when he’s needed by the Crown. A document listing the entire network of British spies — including Anthony — has been stolen. To protect Sophia, he cuts off all ties and transforms from honorable earl to flirtatious playboy. Heartbroken and confused, Sophia travels to India to find healing. Instead she’s embroiled in a mystery, and is stunned when Anthony appears at the British Residency asking questions — and keeping his distance from her.

“Allen’s skill in creating evocative yet sweet romance novels will appeal to a wide range of readers.”