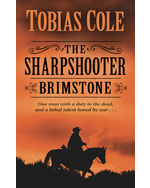 The story of Andersonville prison camp was written in blood, with few left alive to tell it. Union Army sharpshooter Jed Wells was one of them, a man of conscience sworn to share the tales of those who suffered and died beside him. This promise has brought Jed to Kansas and to sheriff Amos Broughton, a friend and fellow survivor of hell on earth. But the ghosts that haunt Broughton are demanding and hungry. And his dangerous obsession threatens to explode in a vengeful rain of bullets and death — forcing Jed to take up his rifle once again to save a soul damned by terrible secrets buried with the bones of captured soldiers.