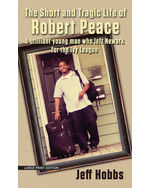 The Short and Tragic Life of Robert Peace: A Brilliant Young Man Who Left Newark for the Ivy League

On arriving at Yale‚ Jeff Hobbs became fast friends with the man who would be his roommate for four years. Robert Peace’s life had been rough‚ living in poverty with his mother in 1980s Newark‚ his father in jail. But he was a brilliant student‚ and it was supposed to get easier. It didn’t. In an honest rendering of Robert’s relationships in two fiercely insular worlds‚ Hobbs encompasses the most enduring conflicts in America.

"With novelistic detail and deep insight, Hobbs . . . registers the disadvantages his friend faced while avoiding hackneyed fatalism and sociology . . . reveals a man whose singular experience and charisma made him simultaneously an outsider and a leader in both New Hampshire and Newark . . . This is a classic tragedy of a man who, with the best intentions, chooses an ineluctable path to disaster."

"Peace navigated the clashing cultures of urban poverty and Ivy League privilege, never quite finding a place where his particular brand of nerdiness and cool could coexist . . . [Hobbs] set out to offer a full picture of a very complicated individual. Writing with the intimacy of a close friend, Hobbs slowly reveals Peace as far more than a cliché of amazing potential squandered."