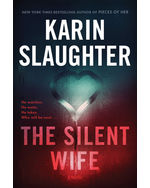 Investigating the killing of a prisoner during a riot inside a state penitentiary, GBI investigator Will Trent is confronted with disturbing information. One of the inmates claims that he is innocent of a brutal attack for which he has always been the prime suspect. The man insists that he was framed by a corrupt law enforcement team led by Jeffrey Tolliver and that the real culprit is still out there — a serial killer who has systematically been preying on women across the state for years. If Will reopens the investigation and implicates the dead police officer with a hero’s reputation of wrongdoing, the opportunistic convict is willing to provide the information GBI needs about the riot murder.

Only days ago, another young woman was viciously murdered in a state park in northern Georgia. Is it a fluke, or could there be a serial killer on the loose?

As Will Trent digs into both crimes it becomes clear that he must solve the cold case in order to find the answer. Yet nearly a decade has passed — time for memories to fade, witnesses to vanish, evidence to disappear, and lies to become truth. But Will can’t crack either mystery without the help of the one person he doesn’t want involved: his girlfriend and Jeffrey Tolliver’s widow, medical examiner Sara Linton.

When the past and present begin to collide, Will realizes that everything he values is at stake . . .

“Slaughter adds depth to her bestselling series with the investigations of old and current cases, while also advancing the key personal relationship. Another slam dunk.”

“The emotionally sophisticated characters work through the brutality of their jobs in this dynamic psychological thriller and police procedural that will please readers of Slaughter’s “Grant County” series. For fans of Meg Gardiner, David Baldacci, and Carrie Smith.”

“Slaughter delivers an unflinching, deeply empathetic exploration of the stigma surrounding rape and the enduring trauma suffered by its survivors.”