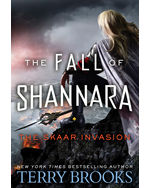 The Four Lands are under siege. Wielding a magical ability virtually impossible to combat, mysterious invaders defeat the fearsome Troll armies then turn their savagery on the Druid order. Dar Leah, once the High Druid’s Blade, has crossed swords with their ruthless leader before. He Knows that if any hope exists it lies with the Druid Drisker Arc, now trapped inside vanished Paranor.

If Tolkien is the grandfather of modern fantasy, Terry Brooks is its favorite uncle.