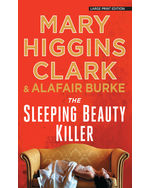 Casey Carter was convicted of murdering her wealthy fiancé fifteen years ago, but has always claimed that she’s innocent. Although she was charged and served out her sentence in prison, she is still living “under suspicion.” Her story attracts the attention of Laurie Moran and the Under Suspicion news team. With Alex Buckley taking a break from the show, Under Suspicion introduces a new on-air host named Ryan Nichols. He’s got a big reputation and the attitude to match it. Ryan has no problems with steering — and stealing — the show, and even tries to stop Laurie from taking on Casey’s case because he’s so certain she’s guilty.

“A clever plot and a cast of intriguing characters, whose actions and agendas are easily misconstrued . . . The authors keep Laurie and the reader grasping for answers till the end.”

“A quick suspense read from two very popular writers and will satisfy plenty of eager readers.”

“Fleet, conscientious, and utterly true to its carefully wrought formula.”