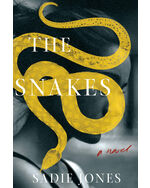 A tense and violent story of the Adamsons, a dysfunctional English family, with exceptional wealth, whose darkest secrets come back to bite them. Set mostly in rural France during contemporary times, The Snakes is an all-consuming read and a devastating portrait of how money corrupts, and how chance can deal a deadly hand.

The Snakes exposes the damage wreaked by parents on children as observed by a new member of the family, Dan, a mixed-race man from Peckham who marries Bea, the daughter who refuses to take any of her father’s filthy money. But when Bea’s brother Alex (who runs a shabby hotel in Paligny, France) dies suddenly in unexplained circumstances, the confusion and suspicion which arise bring other dark family secrets — and violence — to the surface. And none of the family, even the good members, go untouched.