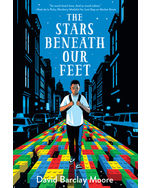 The Stars Beneath Our Feet

It’s Christmas Eve in Harlem, but twelve-year-old Lolly Rachpaul and his mom aren’t celebrating. They’re still reeling from his older brother’s death in a gang-related shooting just a few months earlier. Then Lolly’s mother’s girlfriend brings him a gift that will change everything: two enormous bags filled with Legos. Lolly’s always loved Legos, and he prides himself on following the kit instructions exactly. Now, faced with a pile of building blocks and no instructions, Lolly must find his own way forward.

His path isn’t clear — and the pressure to join a “crew,” as his brother did, is always there. When Lolly and his friend are beaten up and robbed, joining a crew almost seems like the safe choice. But building a fantastical Lego city at the community center provides Lolly with an escape — and an unexpected bridge back to the world.