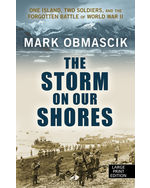 The Storm on Our Shores: One Island, Two Soldiers, and the Forgotten Battle of World War II

May 1943. The Battle of Attu raged on the Aleutian island amidst Arctic cold, impenetrable fog, and rocketing winds. American and Japanese forces fought a yearlong campaign, suffering thousands of casualties. Among them was Japanese medic Paul Nobuo Tatsuguchi, a Hiroshima native who had been educated in California. He loved America, but was called to enlist in the Imperial Army of Japan. Heartsick, Tatsuguchi performed his duties and kept a diary — never knowing that finding it would lead Silver Star–winning American soldier Dick Laird to find solace for his own tortured soul.