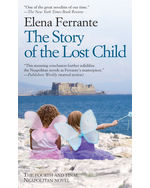 The Story of the Lost Child

A New York Times Bestseller
Longlisted for the 2016 MAN BOOKER INTERNATIONAL PRIZE
Named TIME Magazine's #1 Book in it's "10 Best Fiction Books of 2015" list
Named one of the "10 Best Fiction Books of 2015" by The New York Times Book Review
Named one of the "10 Best Fiction Books of 2015" by People Magazine
Featured in the Wall Street Journal's list of "15 Books to Read This Fall"
Included as one of “30 blockbuster novels to look out for this fall” by Entertainment Weekly
Listed as one of Publisher Weekly's "Most Anticipated Books of Fall 2015"
Included in the Kirkus list of "21 Must-read Fall books"
Featured as one of the New York Times Book Review's "100 Notable Books of 2015"
The Neapolitan Novels (Book 4)
Here is the conclusion of the dazzling saga of two friends, the brilliant, bookish Elena and the fiery, uncontainable Lila. Theirs is a long and remarkable story that readers will return to again and again, and, like Elena and Lila themselves, every return will bring with it new discoveries.

“Word of mouth launched this series, glowing reviews helped, and, eventually, a publishing phenomenon was born. The series’ conclusion is a genuine literary event.”

“Ferrante has created a mythic portrait of a female friendship in the chthonian world of postwar Naples.”