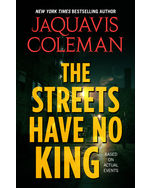 The Streets Have No King

After seven years in prison, multimillionaire drug mogul Kane Garrett is back. But instead of diving back into the drug game he’s teaching a college class, infusing business principles with the ruthless edge he developed on the streets. When a student ― and heavy heroin dealer ― named Basil catches his eye, Kane takes him on as a protégé. Together, they build the biggest, smartest drug trafficking business the state has ever seen. But when Basil meets Kane’s only daughter, lines get crossed and their business union becomes a deadly rivalry.