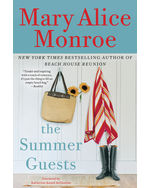 Late August is a beautiful time on the Southern coast, but it’s also peak hurricane season. When a hurricane threatens, an eclectic group of evacuees flees to the farm of their friends Grace and Charles Phillips in North Carolina. The group includes the Phillips’s daughter Moira, equestrian Javier Angel de la Cruz, makeup artist Hannah McLain, horse breeder Gerda Klug and her daughter Elise, and island resident Cara Rutledge. During one of the most challenging weeks of their lives, relationships are put to the test. But as the storm passes, they realize that what really matters isn’t what they brought with them — it’s what they’ll take with them once they leave.