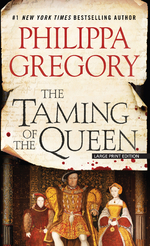 The Taming of the Queen

Thirty-year-old widow Kateryn Parr has no choice when a man old enough to be her father who has buried four wives commands her to marry him. Kateryn has no doubt about the danger she faces. But King Henry VIII adores his new bride and her trust in him grows. A leader of religious reform and the first woman to publish in English, Kateryn unites the royal family and creates a radical study circle at the court. But is this enough to keep her safe?

From an author who has described all of Henry's queens comes a deeply intimate portrayal of the last: a woman who longed for passion, power, and education at the court of a medieval killer.

"Gregory does her usual excellent job of ratcheting up the intrigue and suspense as another intelligent and strong-willed heroine fights for her life and her legacy. "

"Gregory puts readers at the scene with visceral details. "