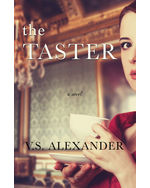 In early 1943, Magda Ritter’s parents send her to relatives in Bavaria to keep her safe from the Allied bombs strafing Berlin. Young German women are expected to do their duty — work for the Reich, or marry and produce strong, healthy children. Magda is assigned to the Berghof, Hitler’s mountain retreat. After weeks of training, she learns her assignment: she will be one of several young women tasting the Führer’s food, offering herself in sacrifice to keep him from being poisoned. Vividly written and ambitious in scope, The Taster examines the harrowing moral dilemmas of war in an emotional story filled with acts of extraordinary courage.