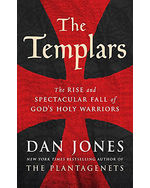 The Templars: The Rise and Spectacular Fall of God's Holy Warriors

In this groundbreaking narrative history, Dan Jones tells the true story of the Templars for the first time in a generation, drawing on extensive original sources to build a gripping account of these Christian holy warriors whose heroism and alleged depravity have been shrouded in myth. The Templars were protected by the pope and sworn to strict vows of celibacy. They fought the forces of Islam in hand-to-hand combat on the sun-baked hills where Jesus lived and died, finding their nemesis in Saladin, who vowed to drive all Christians from the lands of Islam. Experts at channeling money across borders, they established the medieval world’s largest and most innovative banking network and waged private wars against anyone who threatened their interests.

“Dan Jones is an entertainer, but also a bona fide historian. Seldom does one find serious scholarship so easy to read.”

— The Times (Book of the Year)