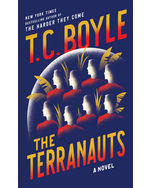 It’s 1994, and in the Arizona desert a grand experiment is underway. As climate change threatens the earth, eight scientists, four men and four women dubbed the “Terranauts,” are to live under glass in a prototype of an off-earth colony. With humor and wit, T.C. Boyle inhabits the perspectives of the players in this survivalist game, illuminating the inherent fallibility of human nature.

This is one of Boyle’s best—and quite possibly one of the best of the year.

A virtuoso storyteller and a connoisseur of hubris, Boyle mesmerizes and provokes . . . Boyle is a literary star, and an all-points publicity campaign and author tour will launch this shrewd and irresistible novel of ambition and folly.

A sprawling tale of achievement, yearning, pride, and human weakness . . . a multilayered work that recalls the tragicomic realism of Saul Bellow and John Updike.