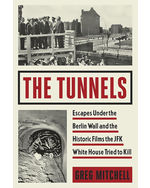 In the summer of 1962, the year after the rise of the Berlin Wall, a group of young West Germans risked prison, Stasi torture, and even death to liberate friends, lovers, and strangers in East Berlin by digging tunnels under the Wall. Then two U.S. television networks heard about the secret projects and raced to be first to document them from the inside. NBC and CBS funded two separate tunnels in return for the right to film the escapes, planning spectacular prime-time specials. President John F. Kennedy, however, was wary of anything that might spark a confrontation with the Soviets, having said, “A wall is better than a war,” and even confessing to Secretary of State Dean Rusk, “We don’t care about East Berlin.” JFK approved unprecedented maneuvers to quash both documentaries, testing the limits of a free press in an era of escalating nuclear tensions.

“Mitchell delivers a gripping, blow-by-blow account of one grueling dig and dramatic rescue…Mitchell’s tense, fascinating account reveals how the U.S. undermined a freedom struggle for the sake of diplomacy.”

“Mitchell excels at describing the idealistic men and women who built the passageways that brought scores of refugees to safety, revealing the wall's symbolic importance and how it endured throughout the Cold War. He provides interviews with many important players who contribute to the fast-paced narrative.”