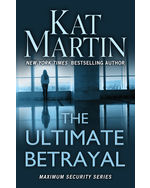 When journalist Jessie Kegan’s father is accused of espionage and treason, Jessie has no doubt he is innocent. Before Colonel Kegan can stand trial, he’s found dead — and Jessie suspects it was murder. She’s determined to clear her father’s name but going after the truth puts her in the crosshairs of a killer who wants that truth to stay buried with her father. Protecting Jessie Kegan is a job bodyguard Brandon Garrett can’t refuse. Jessie isn’t just a client at Maximum Security — she’s the sister of his best friend, Danny, killed in Afghanistan. Jessie and Bran will have to risk everything to expose her father’s killer — before his legacy dies with his daughter.

“Martin is a terrific storyteller.”

“[A] master of suspenseful romance . . . Martin doesn’t hold back on the page-turning thrills or steamy love scenes.”

“It doesn’t matter what Martin’s characters are up against-she dishes up romantic suspense, sizzling sex and international intrigue.”