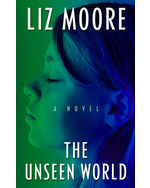 Ada Sibelius is raised by her brilliant, eccentric father, who directs a computer science lab in 1980s-era Boston. Home-schooled, Ada accompanies David to work every day. As the lab gains acclaim, his mind begins to falter. Taken in by one of David’s colleagues, Ada sets out to uncover her father’s secrets: a process that carries her from childhood to adulthood.

“When a brilliant scientist specializing in artificial intelligence develops Alzheimer’s, his young daughter must decode the mystery of his true identity in this multi-layered page-turner that includes elements of computer science, cryptography, and puzzles. The cleverly-plotted, character-driven narrative provides a nuanced exploration of what it means to be human. Moore achieves David Foster Wallace’s ideal that literature should “make our heads throb heartlike.” For fans of Richard Powers and David Auburn’s Proof. See also A Doubter’s Almanac by Ethan Canin.” — Bill's Bookshelf Selector, Bill Kelly

“. . . a striking examination of family, memory, and technology. . . . Mysteries build, and Moore’s gift for storytelling excels. This is a smart, emotionally powerful literary page-turner.”