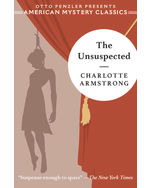 Why did Rosaleen Wright hang herself in a soundproof room? She left an unsigned note, peppered with stiff religious references and no trace of her trademark vitality or wit. The police believe it was suicide, but Rosaleen’s best friend, Jane, is suspicious. To prove Rosaleen was murdered, she takes a job with the man who killed her. Luther Grandison, Rosaleen’s boss, is a New York theatrical impresario. Rosaleen’s letters to Jane described a greedy man who stole from his adopted daughter when his bank account ran low. Jane thinks Grandison killed her to protect his secret, but to prove it she will have to face down one of the finest murderers Broadway has ever seen.