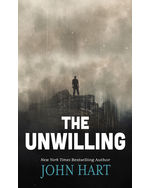 Gibby’s older brothers have already been to war. One died there. The other came back a decorated killer now freshly released from prison. Jason wants a relationship with the younger brother he hasn’t known for years, and coaxes Gibby into a day at the lake with whisky and women. When one of the women is savagely murdered, suspicion turns to Jason. Determined to prove Jason innocent, Gibby must dive deep into his brother’s hidden life. What he discovers is more disturbing than he could have imagined — and why the most dangerous man alive wants him back in prison.