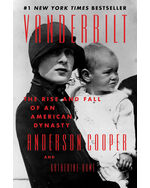 
The Vanderbilts: An American Dynasty

CNN anchor Anderson Cooper teams with New York Times bestselling historian and novelist Katherine Howe to chronicle the rise and fall of a legendary American dynasty — his mother’s family, the Vanderbilts. Moving from the hardscrabble wharves of old Manhattan to the lavish drawing rooms of Gilded Age Fifth Avenue, from the ornate summer palaces of Newport to the courts of Europe, and all the way to modern-day New York, Cooper and Howe wryly recount the triumphs and tragedies of an American dynasty unlike any other. Drawing on never-before-seen documents and told from a unique insider’s viewpoint, this is a rollicking, quintessentially American history as remarkable as the family it so vividly captures.