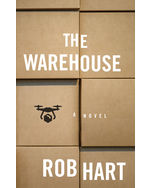 Paxton never thought he’d be working for Cloud, the giant tech company that’s eaten much of the American economy. Much less that he’d be moving into one of the company’s sprawling live-work facilities. But compared to what’s left outside, it doesn’t seem so bad. It’s more than anyone else is offering. Zinnia never thought she’d be infiltrating Cloud. But now she’s undercover, inside the walls, risking it all to ferret out the company’s darkest secrets. And Paxton might just make the perfect pawn. If she can bear to sacrifice him. As the truth about Cloud unfolds, Zinnia must gamble everything on a desperate scheme — one that risks both their lives.