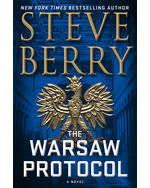 Former Justice Department Agent Cotton Malone learns of a private auction for incriminating information about Poland’s president. The price of admittance is one of the precious relics of the Arma Christi, the weapons of Christ. Malone steals the Holy Lance, a thousand-year-old spear sacred to both Christians and the Polish people, and then attends the auction. But things go awry, and Malone is thrust into a battle between three nations over information that could change the balance of power in Europe. From Bruges, to Wawel Castle, to an ancient Polish salt mine, Malone is caught up in a deadly war — the outcome of which turns on a secret known as the Warsaw Protocol.