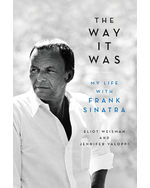 The Way It Was: My Life with Frank Sinatra

By the time Weisman met Sinatra in 1976, he was already the Voice, a man who held sway over popular music and pop culture for forty years, who had risen to the greatest heights of fame and plumbed the depths of failure, all the while surviving with the trademark swagger that women pined for and men wanted to emulate. Passionate and generous on his best days, sullen and unpredictable on his worst, Sinatra invited Weisman into his inner circle, an honor that the budding celebrity manager never took for granted. Even when he was caught up in a legal net designed to snare Sinatra, Weisman went to prison rather than being coerced into telling prosecutors what they wanted to hear.