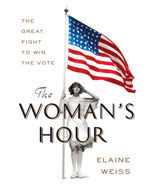 The Woman's Hour: The Great Fight to Win the Vote

Soon to be a major television event

Nashville, August 1920. Thirty-five states have approved the Nineteenth Amendment, granting women the right to vote; one last state — Tennessee — is needed for women’s voting rights to be the law of the land. The suffragists face vicious opposition from politicians, clergy, corporations, and racists who don’t want black women voting. And then there are the “Antis” — women who oppose their own enfranchisement, fearing suffrage will bring about the nation’s moral collapse. And in one hot summer, they all converge for a confrontation, replete with booze and blackmail, betrayal and courage.

Following a handful of remarkable women who led their respective forces into battle, The Woman’s Hour is the gripping story of how America’s women won their own freedom, and the opening campaign in the great twentieth-century battles for civil rights.

“Remarkably entertaining . . . a timely examination of a shining moment in the ongoing fight to achieve a more perfect union.”

“This well-researched and well-documented history reveals how pro-suffragists sometimes compromised racial equality to win white women’s enfranchisement, and that, although the 19th Amendment was ratified, there exists to this day an ongoing battle to effect universal, unrestricted suffrage.”

“[An] important tale . . . Weiss’ reportage . . . enables her to add splashes of color [and] wonderful dimension.”

“Riveting . . . Weiss provides a multidimensional account of the political crusade . . . The result is a vivid work of American history.”