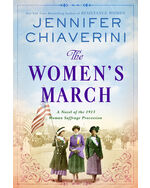 Twenty-five-year-old Alice Paul returns to her native New Jersey after several years on the front lines of the suffrage movement in Great Britain. Weakened from imprisonment and hunger strikes, she is nevertheless determined to invigorate the stagnant suffrage movement in her homeland. To inspire support for the campaign, Alice organizes a magnificent procession down Pennsylvania Avenue in Washington, DC, the day before the inauguration of President-elect Woodrow Wilson, a firm antisuffragist. On March 3, 1913, the glorious march commences, but negligent police allow vast crowds of belligerent men to block the parade route — jeering, shouting threats, assaulting the marchers — endangering not only the success of the demonstration but the women’s very lives.

“This politically aware novel about a historic quest for democratic justice compels readers to contemplate everything that has and hasn’t changed regarding voting rights and gender and racial equality.”