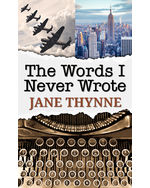 The Words I Never Wrote

New York, present day: Juno Lambert buys a 1931 Underwood typewriter that once belonged to celebrated journalist Cordelia Capel. Within its case she discovers an unfinished novel, igniting a transatlantic journey to fill the gaps in the story of Cordelia and her sister and the secret that lies between them.

Europe, 1936: Cordelia’s sister Irene marries a German industrialist who is a Nazi sympathizer. Irene doesn’t dare admit what her existence is truly like, so Cordelia decides to fill in the blanks on her Underwood. When Juno reads the unfinished novel, she resolves to uncover the secret that continued to divide the sisters amid the turmoil of love, espionage, and war.