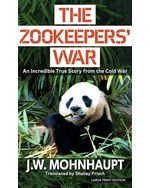 The Zookeepers' War: An Incredible True Story from the Cold War

Living in West Berlin in the 1960s often felt like living in a zoo, with the world always watching. On the other side of the Iron Curtain, the East Berlin zoo was spacious and lush, a socialist utopia where everything was perfectly planned . . . and then rarely successfully finished. Berlin’s two zoos quickly became symbols of the divided city’s two halves. So no one was terribly surprised when the head zookeepers on either side started an animal arms race — competing to have the most pandas and hippos. The Zookeepers’ War is an epic tale of an animal-mad city in which zookeeping became a way of continuing politics by other means.

“Cold War Berlin bursts to life in this riveting, lively German bestseller chronicling the fierce rivalry between zoos on either side of the Iron Curtain . . . Mohnhaupt is a keen guide to the difficulties of a divided Berlin and to the enchantment of a career devoted to wild animals.”

“An offbeat tale from the Cold War . . . with plenty of near-comical turns.”