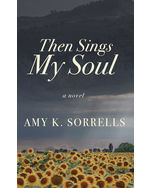 
Then Sings My Soul

1904, Chudniv, Ukraine. Playing hide-and-seek in fields of sunflowers, young Jakob never imagines the horrific secrets he will carry as he and his brother escape through genocide-ridden Eastern Europe. 1994, South Haven, Michigan. At age 94, time is running out for hope that Jakob can be free from his burden of guilt. Jakob and his daughter, Nel, are forced to face the realities of his worsening dementia — as well as emerging shadows and flashbacks about his baby sister from nearly a century past. As father and daughter race against time to discover the truth, the God they have both been running from shows that he redeems not only broken years, but also the future.