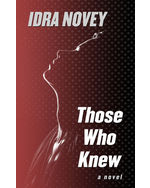 On an unnamed island country ten years after the collapse of a U.S.-supported regime, Lena suspects the powerful senator she was involved with back in her student activist days is taking advantage of a young woman who’s been introducing him at rallies. When the young woman ends up dead, Lena revisits her own fraught history with the senator and the violent incident that ended their relationship.

Why didn’t Lena speak up then, and will her family’s support of the former regime still impact her credibility? What if her hunch about this young woman’s death is wrong?

“Novey’s writing is so singularly vibrant . . . Dreamy and jarring and exceedingly topical.”

“Propulsive . . . Novey’s storytelling is taut and her diction sharp . . . The book [has a] striking sense of momentum. Add in a slight and intriguing sense of the supernatural, and the result is a provocative novel that has the feel of a thriller.”

“The personal is political in this new novel from Novey. . . . By concentrating on the interconnected and very personal stories of each [character], Novey negotiates the surreal reality of an aging port city that is both victim and beneficiary of globalization. . . . Highly recommended.”

“Novey creates a landscape in which her characters may represent, or sometimes hide, their nation, class, or station in life. Yet her women overcome such barriers and join together, revealing what they know in order to effect change . . . a modern parable.”