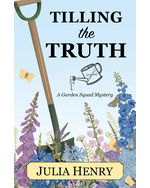 While Lilly digs into a town beautification project, her friend Tamara O’Connor has greater concerns than well-pruned geraniums. Tamara hasn’t been shy about blaming Gladys Preston for thwarting her many attempts to sell off a beautiful beachside property. But accusations fly when Gladys is suddenly found dead — and Tamara is caught standing over the body with a bloody weapon in her hand. As Tamara becomes the prime murder suspect, Lilly and the Garden Squad ladies set out to prove that someone planted the evidence. Cracking this case means confronting a calculating culprit with a penchant for cutting down anyone who gets in the way.