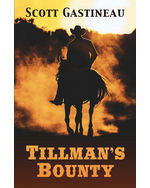 After the mining company he works for goes belly up, young Max Tillman has a chance encounter with a man who has a bounty on his head. He soon takes up tracking other wanted men but realizes he may be in over his head as he travels through some of the most dangerous towns in the West and crosses paths with those who survive by taking what is not theirs. Max meets people who draw him toward a more settled life, but is a peaceful life possible for a man with his past, especially in a region known for its lawlessness? And can he keep those he has come to care for safe?