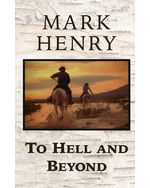 To Hell and Beyond

The Hell Riders: During the bloody Apache Wars, Trap O'Shannon, Clay Madsen, and Ky Roman distinguished themselves with uncommon valor in the brutal Geronimo Campaign. Thirty years later, the Scout Trackers have scattered - until the past comes rolling back with a vengeance. Hard Road to Heaven: Reunited, Trap and his men ride hard from Montana to the Arizona Territory to enforce their fearless brand of justice.