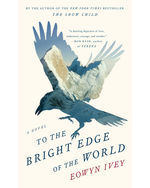 To the Bright Edge of the World

An atmospheric, transporting tale of adventure, love, and survival from the bestselling author of The Snow Child, finalist for the Pulitzer Prize.

In the winter of 1885, decorated war hero Colonel Allen Forrester leads a small band of men on an expedition that has been deemed impossible: to venture up the Wolverine River and pierce the vast, untamed Alaska Territory. Leaving behind Sophie, his newly pregnant wife, Colonel Forrester records his extraordinary experiences in hopes that his journal will reach her if he doesn't return — once he passes beyond the edge of the known world, there's no telling what awaits him.

“Ivey deftly draws the reader into the perils of the journey . . . a compelling historical saga of survival.”

“Ivey not only makes [this novel] work, she makes it work magnificently . . . The Snow Child (a lovely retelling of an old Russian folk tale), was a runaway hit, an international best seller, and a finalist for the Pulitzer Prize. Her second work is even better.”