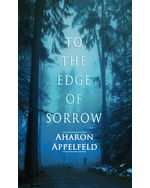 
To the Edge of Sorrow

Battling numbing cold, ever-present hunger, and German soldiers determined to hunt them down, four dozen resistance fighters hide in a Ukrainian forest, resolute to survive the war, sabotage the German war effort, and rescue as many Jews as they can from the trains taking them to concentration camps. When they hear about the advances being made by the Soviet Army, the partisans prepare for what they know will be a furious attack on their compound. In the heartbreaking aftermath, the survivors emerge from the forest to care for their wounded, and grimly confront a world that is surprised by their existence — and profoundly unwelcoming.

“To the Edge of Sorrow is immediately recognizable as Appelfeld’s, through its spare, eerily understated approach, which records atrocities from a grim remove. Unlike many of the brilliantly allusive author’s other novels, this one makes explicit reference to the Holocaust, but there’s still a dreamlike quality at work . . . The story moves toward its climax with the usual disquieting force. Another haunting and heartbreaking tale of the Holocaust from one who survived it.”

“In this spirited novel set in Ukraine near the end of World War II, Appelfeld describes the daily hardships and travails of a band of Jewish resistance fighters in near-reportorial detail. A powerful tale of lives lived amid the duress and horrors of war that is unflinching in its authenticity.”