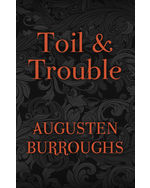 For as long as Augusten Burroughs could remember, he knew things he shouldn't have known. He manifested things that shouldn't have come to pass. And he only told one person about it: his mother. His mother reassured him that it was all perfectly normal because he was descended from a long line of witches, going back to the days of the early American colonies. This knowledge was a bond that he and his mother shared — until the day she left him in the care of her psychiatrist to be raised in his family. After that, Augusten was on his own. He was on a personal journey to understand himself, to navigate the world of tricky power, and to either use or misuse his gift.