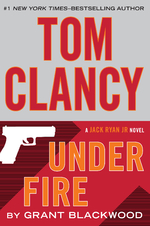 On a routine intelligence gathering mission in Tehran, Jack Ryan, Jr. has lunch with his oldest friend, Seth Gregory, an engineer overseeing a transcontinental railway project. As they part, Seth slips Jack a key, along with a perplexing message. The next day Jack is summoned to an apartment where two men claim Seth has turned. They warn Jack: If you hear from Seth, call us immediately. Do not get involved. But they don’t know Jack. He won’t abandon a friend . . .