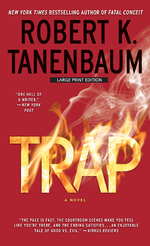 When a tremendous blast rocks an old school building in East Harlem during a meeting of the New York Charter Schools, killing six and wounding a dozen, it’s initially blamed on a natural gas explosion. But Butch Karp digs a little deeper and discovers that it was the work of a mysterious serial arsonist in the employ of the teacher’s union president. But is this a trap? Is there another motive behind the attack that could derail the case?

"Butch [Karp] is doing his courtroom dance, making fools of the smug politicians he believes were behind the murder. Tanenbaum shines in these positively balletic moments . . . [a] reliable thriller."