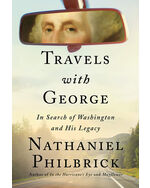 
Travels with George: In Search of Washington and His Legacy

In the fall of 2018, Nathaniel Philbrick embarked on a journey into what Washington called “the infant woody country” to see for himself what America had become in the 229 years since George Washington became president Writing in a thoughtful first person about his own adventures with his wife Melissa and their dog Dora, Philbrick follows Washington’s presidential excursions: from Mount Vernon to the new capital in New York; a month-long tour of Connecticut, Massachusetts, New Hampshire, and Rhode Island; a venture onto Long Island and eventually across Georgia, South Carolina, and North Carolina. The narrative moves smoothly between the eighteenth and twenty-first centuries as we see the country through both Washington’s and Philbrick’s eyes.