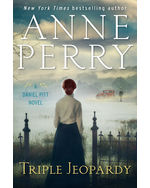 Daniel Pitt, along with his parents, Charlotte and Thomas, is delighted that his sister, Jemima, and her family have returned to London from the States for a visit. But the Pitts soon learn of a harrowing incident: In Washington, D.C., one of Jemima’s good friends has been assaulted and her treasured necklace stolen. The perpetrator appears to be a man named Philip Sidney, a British diplomat stationed in America’s capital who, in a cowardly move, has fled to London, claiming diplomatic immunity. But that claim doesn’t cover his other crimes. . . .

When Sidney winds up in court on a separate charge of embezzlement, it falls to Daniel to defend him. Daniel plans to provide only a competent enough defense to avoid a mistrial, allowing the prosecution to put his client away. But when word travels across the pond that an employee of the British embassy in Washington has been found dead, Daniel grows suspicious about Sidney’s alleged crimes and puts on his detective hat to search for evidence in what has blown up into an international affair.

As the embezzlement scandal heats up, Daniel takes his questions to intrepid scientist Miriam fford Croft, who brilliantly uses the most up-to-date technologies to follow an entirely new path of investigation. Daniel and Miriam travel to the Channel Islands to chase a fresh lead, and what began with a stolen necklace turns out to have implications in three far greater crimes — a triple jeopardy, including possible murder.