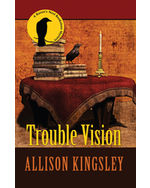 The mayor of Finn’s Harbor calls a press conference about the controversial hotel resort being built on the edge of the city so residents can express their concerns. When the debate turns into a fight‚ Clara Quinn has a troubling premonition. Her cousin Stephanie is enthralled‚ but Clara wants the vision to go away. But a customer in the Raven’s Nest Bookstore tells them of a fatal fall at the hotel’s construction site‚ and Clara knows better than to ignore her Quinn Sense.