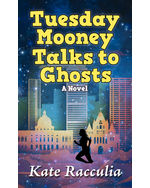 Tuesday Mooney is a loner. She keeps to herself and begrudgingly socializes. But when Vincent Pryce, Boston’s most eccentric billionaire, dies — leaving behind an epic treasure hunt through the city, with clues inspired by his hero, Edgar Allan Poe — Tuesday’s adventure finally begins. Puzzle-loving Tuesday searches for clue after clue, joined by a ragtag crew. The hunt tests their mettle for the promised prize — a share of Pryce’s immense wealth. Pryce’s clues can't be cracked with sharp wit alone; the searchers must summon the courage to face painful ghosts from their pasts (some more vivid than others) and discover their most guarded desires and dreams.