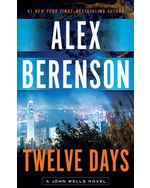 John Wells‚ with his former CIA bosses Ellis Shafer and Vinnie Duto‚ has uncovered a staggering plot to convince the United States President to attack Iran. But they have no hard evidence. Now the President has set a deadline for Iran to give up its nuclear program‚ and the mullahs have responded with a deadly terrorist attack. Now Wells‚ Shafer‚ and Duto know they have only twelve days to find the proof they need.